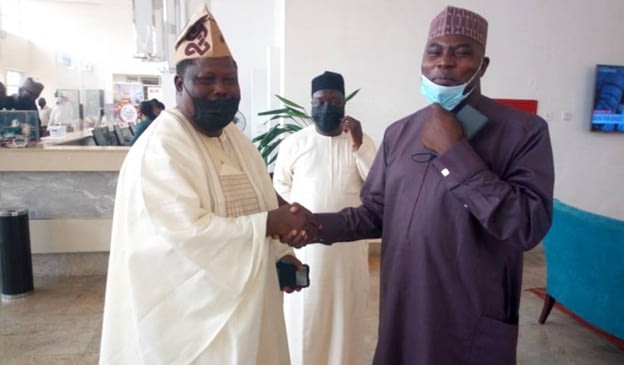 The Vice Chancellor of Crescent University, Abeokuta, Prof. Ibraheem Gbajabiamila has lauded efforts of Founder/President of Al-Ansar Centre for Comprehensive Education, Dr Mohammed Kyari Dikwa on his vision to add value to the education sector in Nigeria.

Dr Dikwa, a former Accountant-General in Nigeria had led an 18-man delegation of academic experts to Crescent University, Abeokuta which prides itself as Citadel of Academic and Moral Excellence on the recommendations of the National Universities for mentoring on the proposed Al-Ansar University.
The proposed university is a by-product of Al-Ansar Foundation founded over 15 years ago with already established secondary school, hospital, security outfit, microfinance institution, radio and television as well as Qur’an school for memorisation.

According to Dr Dikwa, the 2-day visit to Crescent University, ” is to collaborate with you and learn from your success stories”, adding that the proposed university would be nonsectarian and all-embracing. His mission is to give back to the society by contributing his quota to the education sector.

In his words “there is no way that the society will develop without schools” Dikwa has said while also using the medium to express his appreciation to Borno State Governor, Prof. Babagana Zulum for providing hectares of land for the education project.

Welcoming the team,on behalf of the Proprietor of Crescent University, Judge Bola Ajibola, the vice chancellor Prof. Ibraheem Gbajabiamila emphasized that with 99 currently established private universities in Nigeria, institutions such as Crescent University were established to fill some gaps as over one million students taking Unified Tertiary Matriculation Examinations (UTME) yearly could not get access to universities since only 450,000 admission spaces were available.

He said Judge Bola Ajibola was passionate about founding Crescent University to provide further access to the brilliant Muslims especially girls that had been denied access to university education in the past.

While appreciating Dr Dikwa that “it is a noble thing that you are embarking on this venture”, Prof. Gbajabiamila observed that establishing university is a philanthropic gesture because it would take about 30 years to break even.

After the Crescent University management’s interaction with the team and a question and answer session, the latter was taken on a tour of the university facilities including developing projects, College of Law, the Information Communication Technology (ICT) Centre, Adesimbo Adebutu Library and the proposed College of Nursing.