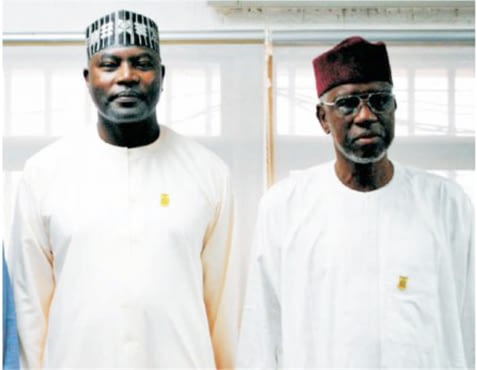 Presenting documents to the Executive Secretary, Prof. Abubakar Adamu Rasheed, Dr. Dikwa said that, the foundation had already secured a 100 hectares of land that would serve as permanent site of the university in Maiduguri, adding that the governor of Borno who issued the C of O also promised to construct roads and some blocks of Staff  houses  and “prominent Nigerians have also pledge one project or the other when construction start at the site.”

The chairman said that the foundation owned a Radio and Television stations and Schools as well as some religious centres in Maiduguri and Abuja. it  has also done some humanitarian support in the North East.

Dr. Dikwa said the foundation   would strictly follow the procedures for Licensing the proposed University be  developing the necessary Physical facilities for it’s ake-off. According to him, the foundation was working towards 2021 take-off.

The Executive Secretary, Prof. Adamu Rasheed in his remarks said he was delighted to receive the team especially the leader whom he described as a courageous, proactive and committed patriot with an uncommon passion for education.

Prof. Rasheed said that as a civil servant Dr. Dikwa had assisted the FGN/University based Union re-negotiations tem with very useful advises.

He saluted the courage of Dr. Dikwa for being the first from Borno state to contemplate establishing a private university in Borno and by extension in the entire old Kanem Bornu Empire, a region that had in the recent past been in the news for the wrong reasons.

He described the Proposed University as the most important project in Borno State capable of attracting both students and Facilities from within and outside the region and also change physical and psychological well being of that region.

Prof. Rasheed commended them for putting together a draft Academic Brief and Physical Master Plan, which NUC would subject to review before approval and advised them to take a second look at the programmes being proposed so as to start with those more relevant to the people and economic development of the region.

The NUC Scribe also advised on the spacing of the courses and new programmes and told the team that availability of facilities and equipment were sacrosanct for all courses before final approval would be granted.

He pledge NUC’s support and advised them to consider all the useful suggestions given in the implementation of the project.

The Director Public Affairs, Malam Ibrahim Yakasai advised the Foundation on the quality of projects, facilities, constructions purchase and installation of facilities and equipment to meet NUC’s set standards.

In a vote of thanks on behalf of the delegation, Malam Abdulmumini Bello thanked the ES and his Management team for the free counsel and suggestions.

He pledge that the project committee would take seriously the advise given in the implementation of the project.