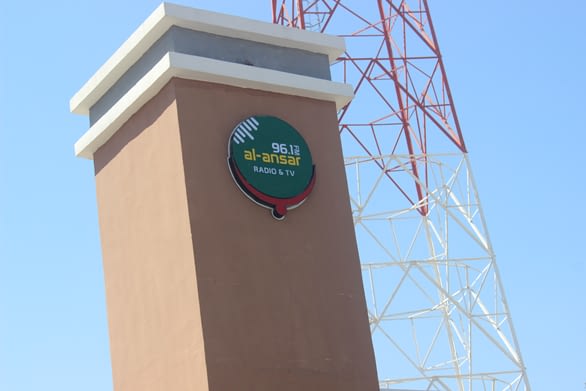 The news of what Al-Ansar Foundation is doing to alleviate the suffering of the vulnerable in our societies has been on for quite some time now. The Foundation is indeed imprinting on the sands of time and rewriting history by providing humanitarian services to Nigerians especially the quadrant considered to be in dire need of support and empathy.

On Monday 4th January 2021, the city of Maiduguri came to a stand-still, as many  people came out in their thousands  to witness the groundbreaking ceremony of the first-ever private University in Kanem-Borno, alongside the official commissioning of International Academy and Radio and Television Station courtesy of Al-Ansar Foundation.

Al-Ansar Foundation (AAF), a non-governmental, Non-Political and Non-Profit making Foundation established in 2015 by the son of the soil, a renowned Public Finance specialist, an astute administrator, a seasoned technocrat and philanthropist; Dr. M. K. Dikwa, mni is complementing government efforts in building a world-class institution that will provide conducive environment for the teaching and learning of the teeming youths in Borno State, North-East and beyond. In addition, the Foundation is also complementing various efforts of the current administration in the State in the area of information dissemination by establishing Radio and Television Station which the Foundation believes will go a long way in addressing some of the challenges facing the State.

In line with its commitment to improving the standard of living of indigenes of Borno State and North-East in particular, through the delivery of timely assistance to the less privileged, provision of comprehensive Western and Islamic Education, teaching of religious tolerance, women empowerment, humanitarian support and other charitable activities, the Foundation recently commissioned Al-Ansar Radio and Television Station (ARTV 96.1 FM), Al-Ansar Academy Maiduguri (ALAAMA) and the groundbreaking ceremony of Al-Ansar University Maiduguri (AUM).

The groundbreaking ceremony and the official commissioning of the Al-Ansar Academy Maiduguri (ALAAMA) and Al-Ansar Radio and Television Station (ARTV 96.1 FM) Maiduguri was performed by Professor Babagana Umara Zulum, mni along side many personalities and dignitaries within and outside the State.

It is on record that six months after the allocation of 100 Hectares of land to the Foundation for the establishment of the first private University in the State, His Excellency, Governor Babagana Umara Zulum on 4th January 2021, performed the groundbreaking ceremony of the proposed Al-Ansar University Maiduguri (AUM). The event was epochal for Professor Umara Zulum, who performed the groundbreaking ceremony at the University site located at 50KM, Damasak/Gubio Road, Maiduguri, Borno State.

The Governor was led by the Founder and President of Al-Ansar Foundation who is also the Founder of the University, Dr. M. K. Dikwa, mni and other members of the Al-Ansar Foundation family, Borno State Council of Traditional Rulers, and top government functionaries. The groundbreaking ceremony of the proposed University along Damasak/Gubio Road on 4th January, marks the latest phase of actualizing the dream and vision of Dr. M. K. Dikwa of providing quality education to the teeming youths of the region and complementing the present administration in the State by developing critical infrastructure intended to enhance development in the State, creat jobs and expand economic opportunities across the North-East region.

More than 2000 people including religious leaders, legislators, state and local government leaders, traditional rulers, development partners, and academia throughout Northern Nigeria gathered for the epoch making occasion, coming in entourages, special buses, local transport and on foot to witness the occasion. The proposed University which is situated on a high ground overlooking the plain landscape of Chabbol Village on the outskirts of Maiduguri, Borno State will take off with two (2) Colleges in addition to other landmark structures necessary for administration and lecturing purposes.

In his keynote address at the occasion, the Founder and President of Al-Ansar Foundation, Dr. M. K. Dikwa, mni began: “Let me start by expressing our sincere appreciation to the Executive Governor of Borno State, Professor Babagana Umara Zulum for his show of love and concern to the Al-Ansar Foundation since its inception. The Foundation is happy and proud to identify with this kind-hearted man, selfless leader, a man of peace and compassion, the man that history has already vindicated, a charismatic politician, academician and a great leader whose actions has already inspired the youths, women, vulnerable and impacted positively on the lives of the people of Borno State and beyond.

To further show solidarity and support to the Foundation’s gesture of embarking on meaningful projects such as the Al-Ansar University, His Excellency, Professor Babagana Umara Zulum in his speech at the occasion directed the construction of 2.3KM road within the University in addition to an ongoing construction of low Aquifer Borehole by the State Government in the University premises. The Governor, also directed the Ministry of Higher Education, Science, Technology and Innovation to liaise with the Founder, Dr. M. K. Dikwa, mni to see how the State Government may further assist and support the implementation of this laudable project which has been adjudged when completed will be an epitome of excellence.

Also, during the groundbreaking ceremony of the Al-Ansar University Maiduguri (AUM), the Executive Governor promised similar support and encouragement to individuals and corporate entities desirous of investing in Borno State, particularly in education. According to him: “We are very much willing to support any individual or group willing to partner with the State Government in order to provide the much-needed qualitative education to our children at all levels.”

Similarly, on the same day, the Executive Governor, Professor Babagana Umara Zulum, mni, FNSE also commissioned two other projects embarked upon by Al-Ansar Foundation:- the Al-Ansar Academy Maiduguri (ALAAMA) and Al-Ansar Radio and Television Station (ARTV 96.1FM) Maiduguri at their respective locations. These projects are clear demonstration of the Foundation’s willingness to contribute to the social and economic development of the State.

At the commissioning of Al-Ansar Academy Maiduguri (ALAAMA), the Founder of the School reiterated the importance of education in building a better society. He said that “Al-Ansar Foundation sees education as a tool for social, economic and religious reengineering of our dear State in spite of the devastating and ravaging effects of the insurgency in recent years. We are glad that through this project “Insha Allah”, we are going to change the narratives.”

Dr. M. K. Dikwa, mni also applauded the efforts of the present administration in the State under the leadership of Professor Babagana Umara Zulum in the area of education.

“Furthermore, what you are witnessing today, is not only the Foundation’s little way of giving back to the society, but a way of complementing the current administration’s efforts under the headship of Professor Babagana Umara Zulum to provide qualitative and affordable education to all and sundry, especially to our youth. There is no doubt, we have a firm belief and confidence in His Excellency’s leadership in the State. He also praised the Governor on various laudable and landmark projects, policies and programmes especially the recently launched 25-years Borno State Development Plan (BSDP) which is aimed at enhancing rapid growth, development and restoring the age-old honour, dignity and prosperity of Borno State.

After the tour of the premises of the Academy and its facilities, Professor Babagana Umara Zulum was very delighted at the state-of-the-art facilities and the resources committed into the project and said that Government will ensure that substandard private schools in the State are closed down.

In a similar development, the Executive Governor, Professor Babagana Umara Zulum with his entourage, proceeded to No.4 Ahmadu Gonimi Road, GRA, Maiduguri where Al-Ansar Radio and Television Station is located to perform the official commissioning of the newly established Station by Al-Ansar Foundation. In his welcome remarks, the Founder and President of Al-Ansar Foundation, Dr. M. K. Dikwa, mni told the cheerful gathering that the establishment of the Radio Station is a clear demonstration of lending support to government’s efforts towards bringing lasting peace, tranquility and development to Borno State among others.

Furthermore, he told the gathering that in the last couple of years, the Foundation have committed resources to provide humanitarian support, information, healthcare services and education to vulnerable and less privileged in our society in order to complement the efforts of the current administration in the State.