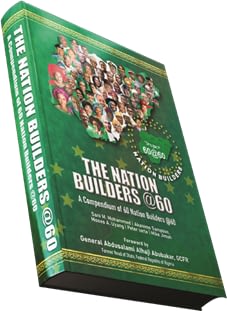 “Project 60 @ 60” is an acronym that reflects where Nigeria is today in her journey of nationhood and economic development, especially the impact which some renowned individuals who share the same birth year with the country have made in making sure that the Nigeria dream is realized.

There is no gainsaying the fact that Nigeria has had a greater number of bad leaders than she has had good ones. This has made it increasingly difficult for the laudable efforts of the few outstanding leaders to find expression. However, we still have men and women who have succeeded in carving a niche for themselves in the historic account of this nation. People who contribute silently and allow the positive impact of their works to speak for them, men and women whose good works will continue to speak in generations to come, the likes of Dr. Mohammed Kyari Dikwa mni.

Dr. Mohammed Kyari Dikwa mni, belongs to this tribe of exceptional leaders. It therefore did not come as a surprise when in 2020 Dr. Dikwa was recognised as one of the 60 nation-builders @ 60. It is clearly a noble achievement for a man who was born in the same year as his country to grow up to contribute so much in making sure that the erstwhile weak economic foundations, institutionalized loopholes that services corrupt practices are replaced with high-end technologically driven solutions that saves the nation Billions of Naira and will continue to do so.

With his purposeful leadership as the accountant-General of Borno State he saved the state tons of money and human resources that were being drained as a result of the placement of square pegs in round holes, sabotage, and inefficiency in the civil service. His innovative ideas will continue to foster economic growth in Borno state through successive administrations.

Upon resumption as the Accountant General of the State, Dr. Dikwa ensured that only people with certified paper and experiential qualifications were allowed to occupy sensitive positions in the state’s finance sector.  He quickly scaled up the human capital development of the state’s ministry of finance workforce by initiating training and retraining of critical stakeholders.

Dr. Dikwa also left an indelible mark in Borno state with the introduction of the e-payment system which has since been integrated and has saved the state billions of naira through efficient and seamless implementation of e-financial management system.

At the federal government level, Dr. Mohammed Kyari Dikwa has the following landmark achievements to his name. These are few among several others that the constraint of space will not allow us to mention here.

Dr. Dikwa has several awards to his name which are testimonials to his valuable contribution to national development. He has declared both in words and action, that for him, the good works has just begun. He is a true achiever in all sense of the word. Coming from a humble background, Dr. Dikwa experienced the childhood of the typical Nigerian child, but he weathered the storms of life through dogged determination, hard-work and diligence.

On the occasion of Dr. Dikwa’s retirement from the Civil Service in 2020, the President and Commander-in-Chief of the Arm Forces Federal Republic of Nigeria, Muhammadu Buhari awarded him with the certificate of meritorious service. This is not a common practice because only people who have made meaningful and exceptional contributions are usually so recognised. It is obvious that Dr. Dikwa did not only serve the Nation diligently for 35 years, but he initiated and implemented revolutionary ideas that have since become cornerstone achievements for the nation.

The high standards he set for himself and his commitment to achieving these standards kept him among the best through his schooling years. A trend he continues to maintain through his personal, professional, and business life. We had a passing interview with some people who have worked or are still working with him, and every single person was full of praise for a man they described as, kind-hearted, disciplined, focused, and humble.

Dr. M.K. Dikwa has an amiable personality and instinctively creates enabling environment for others to thrive around him but he certainly does not blow his own trumpet. He has worked successfully with diverse kinds of people “the good, the bad, and the ugly” and neither his character nor effectiveness at work was ever called to question. We can comfortably say that he emerged with a “straight A’s” after 35 years of service to the nation.

In the words of Tony Robins “the only limit to your impact is your imagination and commitment”. Dr. Dikwa mni is clearly an imaginative creator who has both imagined and birthed incredible innovations in the financial and economic sectors.  Talk of commitment, his devotion to whatever he chooses to do is second to none. To him, obstacles are stepping-stones and never stumbling-blocks.